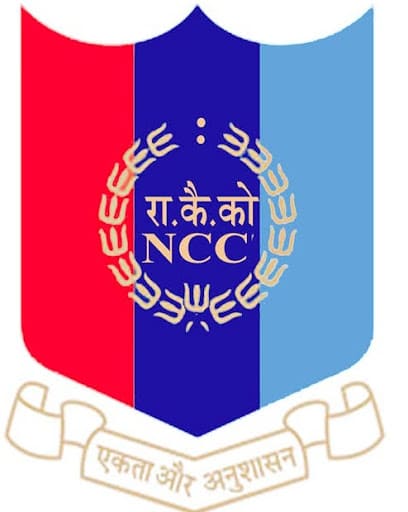 The National Cadet Corps is the Indian military cadet corps with its head Quarters at New Delhi. It is open to school and college students on voluntary basis.The National Cadet Corps in India is a voluntary organization which recruits cadets from high schools, colleges and Universities all over India. The Cadets are given basic military training in small arms and parades. The officers and cadets have no liability for active military service once they complete their course but are given preference over normal candidates during selections based on the achievements in the corps.

"I do hereby solemnly promise that I will serve my motherland most truly and loyally and that, I will abide by the rules and regulations of the National Cadet Crops. Further under the command and control of my commanding officer I will participate in every camp most sincerely and wholeheartedly".

We the cadet of the national cadet corps, do solemnly pledge that we shall always uphold the unity of india.We resolve to be disciplined and responsible citizen of our nation.We shall undertake positive community service in the spirit of selflessness and concern for our fellow beings.

During the 1965 and 1971 wars with Pakistan, NCC cadets were the second line of defence. They organised camps to assist the ordinance factories, supplying arms and ammunition to the front, and also were used as patrol parties to capture the enemy paratroopers. The NCC cadets also worked hand in hand with the Civil Defence authorities and actively took part in rescue work and traffic control. After the 1965 and 1971 Indo-Pak wars the NCC syllabus was revised. Rather than just being the second line of defence, NCC syllabus laid a greater stress on developing qualities of leadership and Officer-like qualities. The military training which the NCC cadets received was reduced and greater importance was given to other areas like social service and youth-management.